How to Waterproof a Basement and Install a Basement Drainage System – The ACCL Way!

Is your basement constantly wet? Do April showers bring May flowers and a flooded basement? Then waterproofing your basement and installing a drain system with a sump pump may be necessary. A wet basement not only prohibits you from using extra space in your home, but it can also turn your basement into a large petri dish ideal for the growth of harmful molds and fungi. 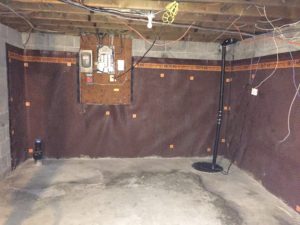 It’s impossible to avoid the fact that breaking up concrete is a filthy task. While you’re working, switch off your furnace or central air conditioning and block all return air vents until you’re finished. Move everything out of the area and drape plastic from the ceiling to create an isolated workstation instead of covering it with plastic.

If you have an unfinished ceiling, make sure the plastic reaches all of the joist spaces. While using the jackhammer, place a fan in the window to help with the heavy dust. Also, put on a dust mask and earplugs. More measures to secure your house during remodeling efforts can be found here.

Electric jackhammers are preferred by professionals since pneumatic jackhammers generate significantly more dust. To begin, hammer a line 16 to 18 inches away from the wall. Begin by chipping in a straight line along the length of the wall, then return to break it down into manageable chunks. Return once the perimeter has been completed to break the concrete row into manageable fragments. If each component has enough freedom to pull away, it will break free more easily, so remove the sections as you go. Remember to make a larger area for your sump basin!

Dig down to the bottom of the footing but not below it once the concrete has been removed. You could wind up with cracks in your wall or worse if you jeopardize the soil beneath the footing. Use rubber feed buckets (usually used for farm animals) since they fit through narrow basement windows and are less likely to damage trim.

It’s ideal to put your basin in an unfinished basement area so you can get to the sump pump quickly. If you don’t intend to complete the basement, put the basin where you want the water to drain out of the house so you don’t have to install as much plastic tubing.

Dig the hole until the point where the top of the basin is flush with the finished concrete. Drill 1-inch holes in each block core and each mortar joint if your waterproofing basement walls are composed of concrete block. The water that collects in the cores and between the blocks will now be able to flow into the drain. Drill the holes as close as possible to the footings. It’s possible that the lower bricks are concrete-filled. You’ll have to demolish any existing walls and install foundation wrap in that instance. As you drill, place a shop vacuum hose close to the hole to reduce dust.

Place the basin in its final position before marking the locations of the holes where the pipes will meet the basin. Keep in mind that towards the basin, there will be a thin layer of rock (one layer thick) under the pipe. Use a reciprocating saw, jigsaw, or hole saw to make the holes. It is not necessary for the holes to be flawless. Don’t remove all of the dirt at once; some will be needed to fill in around the basin. Fill in around it once it’s permanently in place, tamping the ground with a 2×4 as you go.

Shovel in a bottom layer of 1-1/2-in. to 2-in. cleaned river rock before laying the pipe in the trench (a layer of smaller rock can become clogged with minerals and sediments). Every 10 feet, the pipe should slope at least 1/4 inch toward the basin. To get this pitch, rake the rock around. On top of the boulder, place your irrigation pipe. Because regular flexible drainpipe clogs easily, don’t use it. Schedule 10 perforated pipe with a 4-inch diameter is preferred.

Purchase a pipe with 1/2-inch rows. Only one side of the pipe has perforation holes, not all the way around. Install the pipe with the openings pointing down so that the minerals and sediment in the water can flow down and settle into the earth. The water that does rise up into the pipes from below will be reasonably clean as a result. Clean water will extend the life of the entire system by several years. Begin at the basin and push the male end of the pipe about 4 inches into the basin. At the corners, use PVC or ABS elbows. Cementing the parts together isn’t required.

Drill a 1-inch hole in the core of each block and each mortar junction. After you’ve installed your pipe, you’ll need to connect it to the 1-inch irrigation hose that will bring the water from the blocks to the trench. Stick with irrigation hose because a softer hose, such as a garden hose, can be crushed flat by the new concrete. With a hacksaw or reciprocating saw, cut the hose. Make sure each hose portion is several inches past the footing.

If your walls are made of poured concrete rather than block, you’ll need to build a foundation wrap to allow water to drain properly. The foundation wrap is constructed of durable plastic and has rows of dimples that allow water to pass through. With a utility knife, cut the sheets into strips. Allow the bottom half of the strips to run past the footing by bending them at 90 degrees. The length of the wrap against the wall is determined by your circumstances. Run the wrap up 4 in. above the top of the concrete on a poured wall, or up 4 in. past the holes you drilled in the block wall, at the very least. Try to tuck the wrap below the bottom plate if you’re working along stud walls.

It’s time to cover it up after the hoses or foundation wrap are in place. Fill the trench with river rock up to the existing slab’s bottom, then cover the rock with a vapour barrier of at least a 6-mil thickness of plastic. Mix your concrete outside to reduce dust. For slabs and sidewalks, a bagged concrete mix will suffice. To “screed” the fresh concrete flush with the floor, slide a 3-foot strip of 2×4 along the floor and smooth it out with a hand float. After 20 minutes, use a finishing trowel to level it out. Fill the gap beneath any existing walls entirely with the float.

This permits the pump to come up to speed before attempting to force open the check valve, which may be under pressure from many gallons of water. While the pump is running, angle the hole so that water pours down. It’s preferable if your pump has its own output. Other appliances connected to the same circuit may trip a breaker if extension cords go unplugged. The pipe exiting the basement must be placed in a sloped area away from the house.

Consider burying the waste pipe in the trench and having it come back up where you want it if it involves running a pipe back across the basement. If you reside in a cold environment and your pipe will discharge above ground, run it no more than 8 inches past the siding. In the winter, this will keep it from freezing. Basement drain water, with a few exceptions, cannot be put into city sewer systems.

Most systems can be emptied into storm sewers if they are above ground level. Inquire with your building official about the rules in your region.

Take advantage of the warmer summer months to have us look at your basement and help you determine how best to address your basement leakage problems.

Get the job done RIGHT – Hire a professional Waterproofing company!

Don’t Drown in a wet basement!

If you’ve noticed foundation cracks, spots, water, mold, and mildew, don’t ignore the signs or it could lead to more damage and possible health effects.